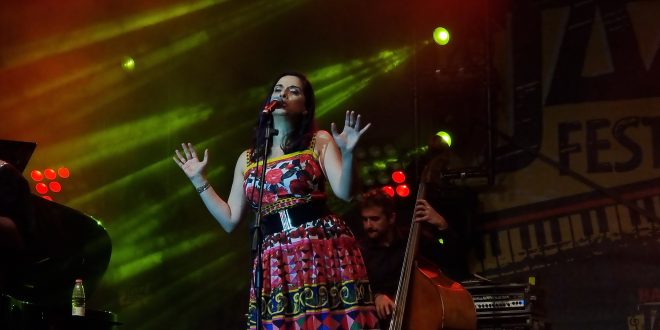 Israeli Singer Daphna Levy: All My Musical Teachers and Mentors Have Bulgarian Roots

Share
SOFIA,  16.08.2022 14:02  (DAHNYELLE DIMITROV, BTA)  All teachers and mentors with whom she grew up as a musician were Bulgarians. An entire generation of Israeli musicians are of Bulgarian origin, Israeli singer Daphna Levy tells BTA in an exclusive interview. Levy also talks about meeting trumpet player Ventzislav (Venci) Blagoev, sensitivity and contrasts in both music and life, the lessons learnt from renowned vocal coach Seth Riggs, as well as her work as an animal rights activist.

Daphna Levy was one of the guest performers at the Bansko Jazz Fest earlier in August.

A: Nothing happens by chance in this life. We were acquainted by the organizers of Bansko Jazz Fest and the result was an excellent personal and professional contact. We began rehearsals via Zoom, but we nevertheless clicked. He is a really wonderful musician.

A: We threw a bridge across and mixed jazz, Israeli and classical music. Some of the jazz standard arrangements are mine and there are some of my own compositions as well.

Q: Any plans to work together again after the jazz fest in Bansko?

A: I don’t know yet. My experience, though, shows that a good initial contact is followed by other projects.

Q: Sensitivity is very important in music. Is it possible to show feeling in music, but not to feel in life?

A: I know many artists who use music to express themselves, but are otherwise very shy or outright introverts.

Q: You are said to be a vocal master of contrast. What does that mean?

A: To me jazz means complete freedom, which allows me to use and to play with the full range of feelings, emotions, contrasts, ideas, sounds…

Q: You have taken lessons from Seth Riggs who invented the Speech Level Singing technique. Was that what you learnt from him and how did it reflect on your voice and the way you sing?

A: His method is quite simple, but genius. What he taught me is that the voice should always be here and now, and should be present, regardless of tones, sounds, style and regardless of what voice you have and what you are singing.

Q: Do you accept the comparisons with Sarah Vaughan? And generally what do you think about the critics, always comparing, generalizing or simply labeling?

A: I wouldn’t say I compare myself to her, but she’s definitely an inspiration to me. I don’t mind comparisons and labels, I try to remain open to people and learn from that.

A: I try to accept everything that comes into my life. I don’t fight, I try to pass it, which is the greatest lesson. Not very successful always, but I try…

Q: You have an MA in Far Eastern philosophy. Which is the most valuable life lesson you learnt while you were studying?

A: What I just said: to accept. To be part of the things happening around me, to accept them without resisting. Very often we have a plan in our heads, while maybe God or the Universe have better plans for us.

I taught meditation as part of my philosophy training. This was the practical part of the course. But my most interesting experience had to do with the music academy in Israel, where I gave a meditation course for performing artists. And it was one of the most meaningful things I’ve ever done, for it really helps in the way you conduct yourself on stage, as well as the performance itself.

Q: How would you describe the path you are treading at the moment?

A: The last few years, particularly after the beginning of the pandemic, were an enormous pause in my career. But that was actually one of my most productive periods, in which I composed a lot of new music and made many new arrangements.

At this particular moment I am extremely for the way things are going and the way I am going. Because my commitments are increasing and I have a lot more invitations for guest appearances all over the world. Also, all these collaborative projects with local musicians that I’m doing are a very essential part of my path. They open the horizons to new styles, new perspectives and give new opportunities for development.

Q: Why is teaching important to you? Doesn’t it take you away from a purely artistic life?

A: Since I started traveling the world, I have no time for teaching at all. So right now it’s a very small part of me and my work. When you teach someone else, you teach yourself first of all. I learn an awful lot from teaching myself.

Q: Your life is dedicated almost entirely to music, but also to something else…

A: OK… A very significant part of my life is dedicated to dogs. I am an activist in rescuing dogs, in finding them homes. Unfortunately, in my country there is a lot to be done about that.

Q: Bulgaria too had this problem some years ago. Now it seems to be back on the agenda again. How is Israel coping?

A: It isn’t. We just try to help, but we find an awful lot of puppies left in the garbage. Sometimes you open the bins and see a puppy inside. And that’s really terrible.

Neutering is the only solution, and then the dogs should be released back on the streets. And we can just feed them. But at least the birth rate is controlled…

Q: Have you found anything in common between music and dogs?

A: Yes. Many years ago, I was involved in a big project about dogs. It involved some of the biggest Israeli stars. We recorded a song that became very popular, was broadcast on many TV stations and used by many organizations. Many animals were saved thanks to our song.

Q: Do you fear for your future as a person, given the overall situation in the world?

A: I practice acceptance – here we go back to Eastern philosophy. I simply try to accept what is happening.

Q: And finally, would you share your special „connection“ with Bulgaria…

A: I had a Bulgarian student who took lessons from me for four years. He is a wonderful jazz musician and has told me a lot about Bulgaria.

All my teachers I grew up with and was brought up with as a musician, are Bulgarian, as are all my mentors. They all came to Israel from Bulgaria. It’s a whole generation of Israeli musicians who are of Bulgarian descent. They gave me the foundation as a musician. /BR/ 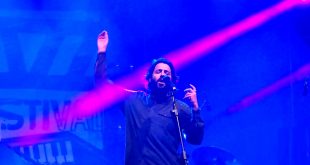 Salvador Sobral: I believe more in people than in God

Mervyn Kurlansky: Making Art Can Be Considered a Form of Design